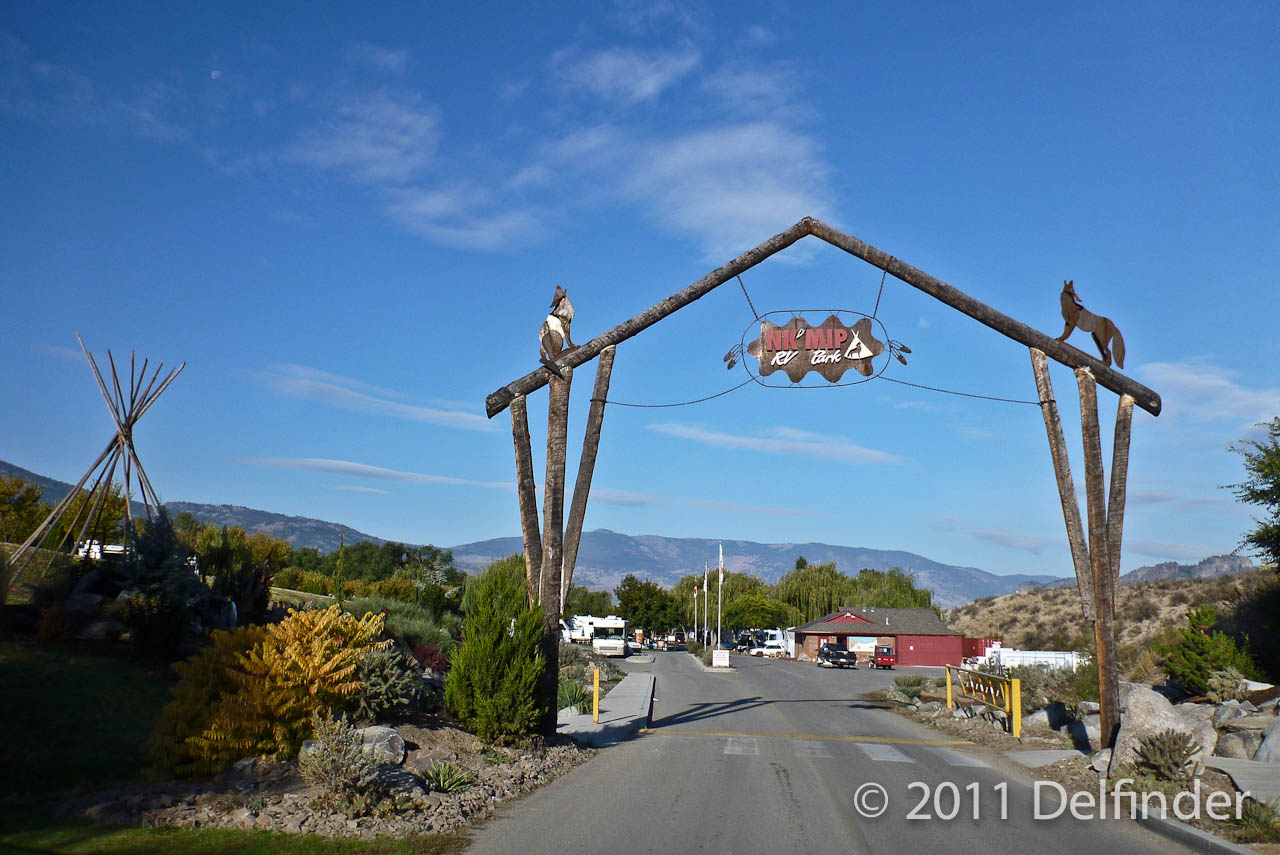 We stayed at probably our most beautiful campground so far, the Nk’MIP (pronounced in-ka-meep) campground. It is operated by the Osoyoos First Nations Band and is located in a reserve in the fertile Okanagan Valley in southern British Columbia. The campground is part of a resort which also includes a 4-star hotel, a winery, golf course and a museum, the Desert Cultural Centre. Here are art, nature, history and present melted together. 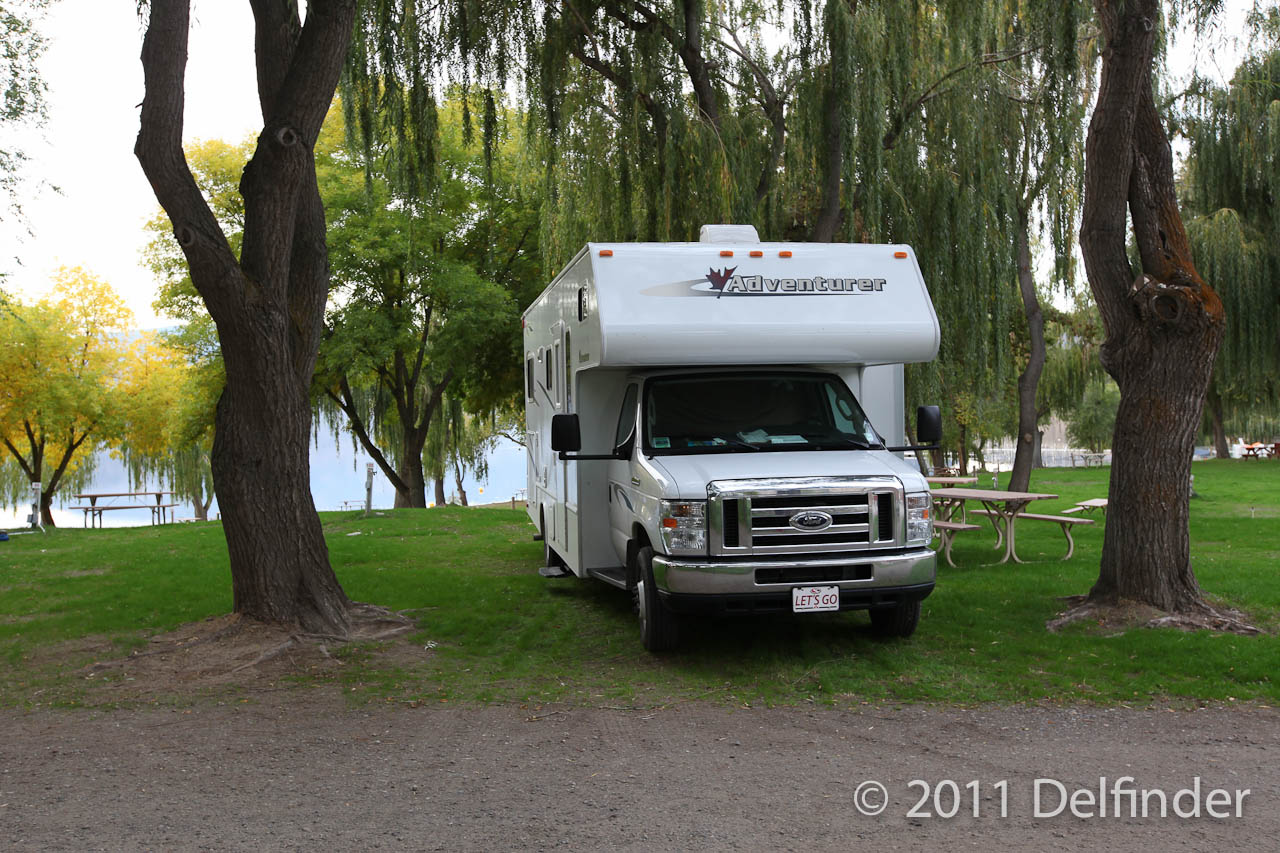 Our motor home is parked right on the edge of Osoyoos Lake, surrounded by yellow weeping willows, with a view to the opposite shore and the town which lights are reflected in the lake at night. Cacti are growing in the flower beds, the grounds are well maintained. Artfully crafted metal sculptures represent the traditional life of the First Nations and the traffic signs are in their language. 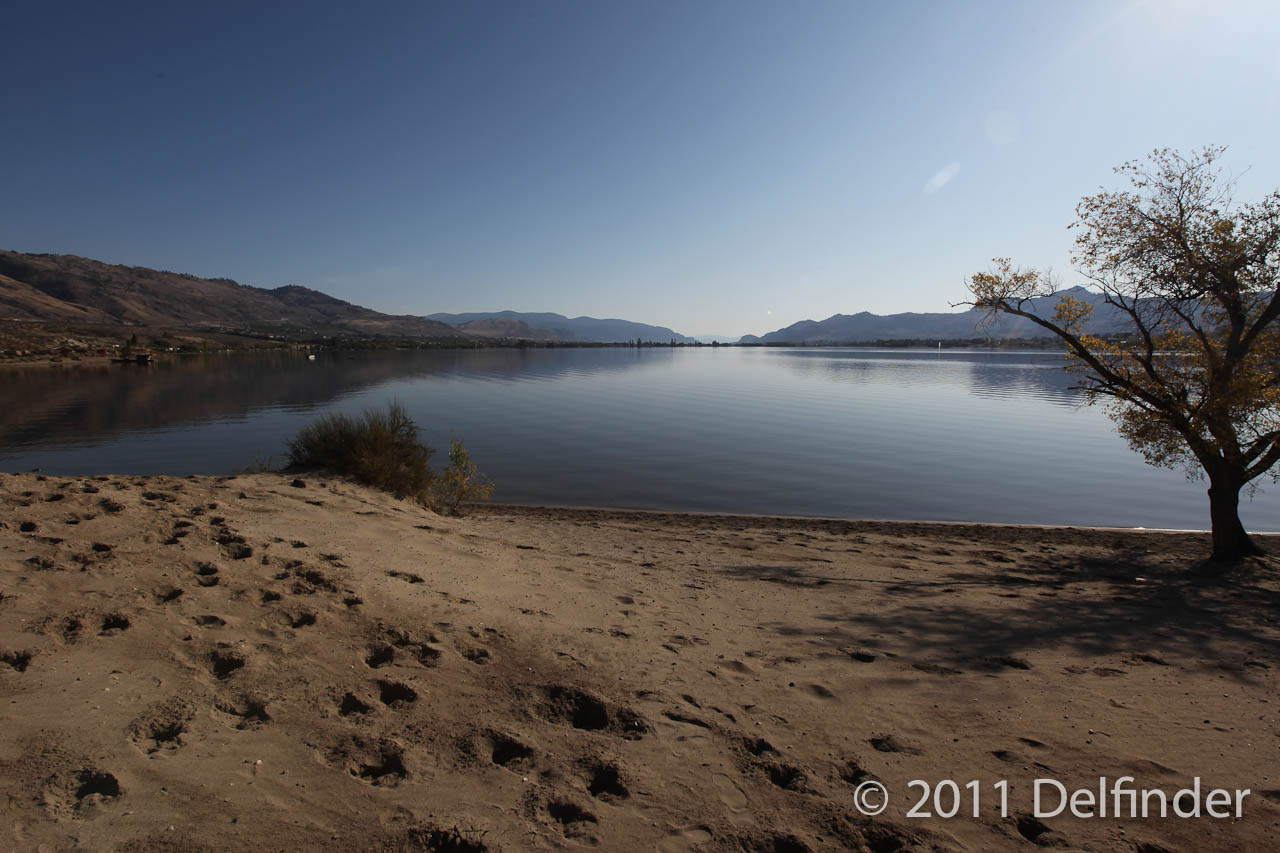 Once we discovered a „desert“ in the Yukon and now Canada surprises us again with a desert. Osoyoos is the most southern town of the Okanagan Valley. The desert in Osoyoos is part of the Great-Basin desert, a large dry area in the United States. The very Northern tip of the Great-Basin desert extends into Canada. Osoyoos has the highest average temperatures in Canada and the longest growing season. Fresh fruits and wine are produced through intensive irrigation farming. The area is not really a desert, it is rather a shrub-steppe with cacti, rattlesnakes and scorpions. 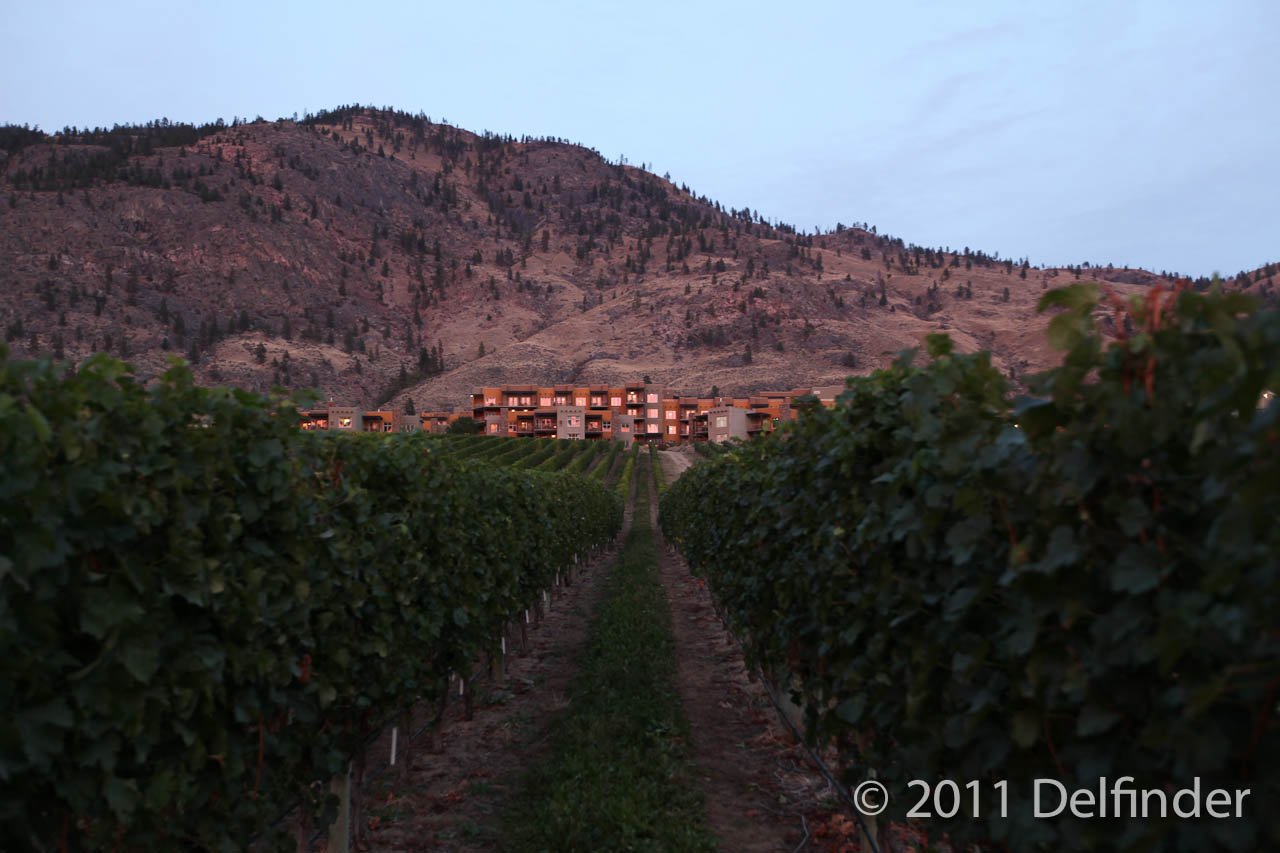 The modern Nk’Mip Desert Cultural Centre is located at the foot of Anarchist mountain. The  Museum is designed according to ecological criteria and offers an insight into both the history of the Osoyoos First Nations as well as in the landscape. A trail leads through the rocky landscape with antelope and sage bushes and scattered pines towards a reconstructed Indian village. A 20-minute video with beautiful images shows the conflicts young First Nations experience today between modern life and their ancient roots.
The museum is located next door as well as the 4-star hotel. They both fit harmoniously into the desert-like landscape of Osoyoos. The hotel consists of several Mediterranean, Mexican-style buildings in shades of ocher with a pool area in the middle and a view over the vineyard to the lake. 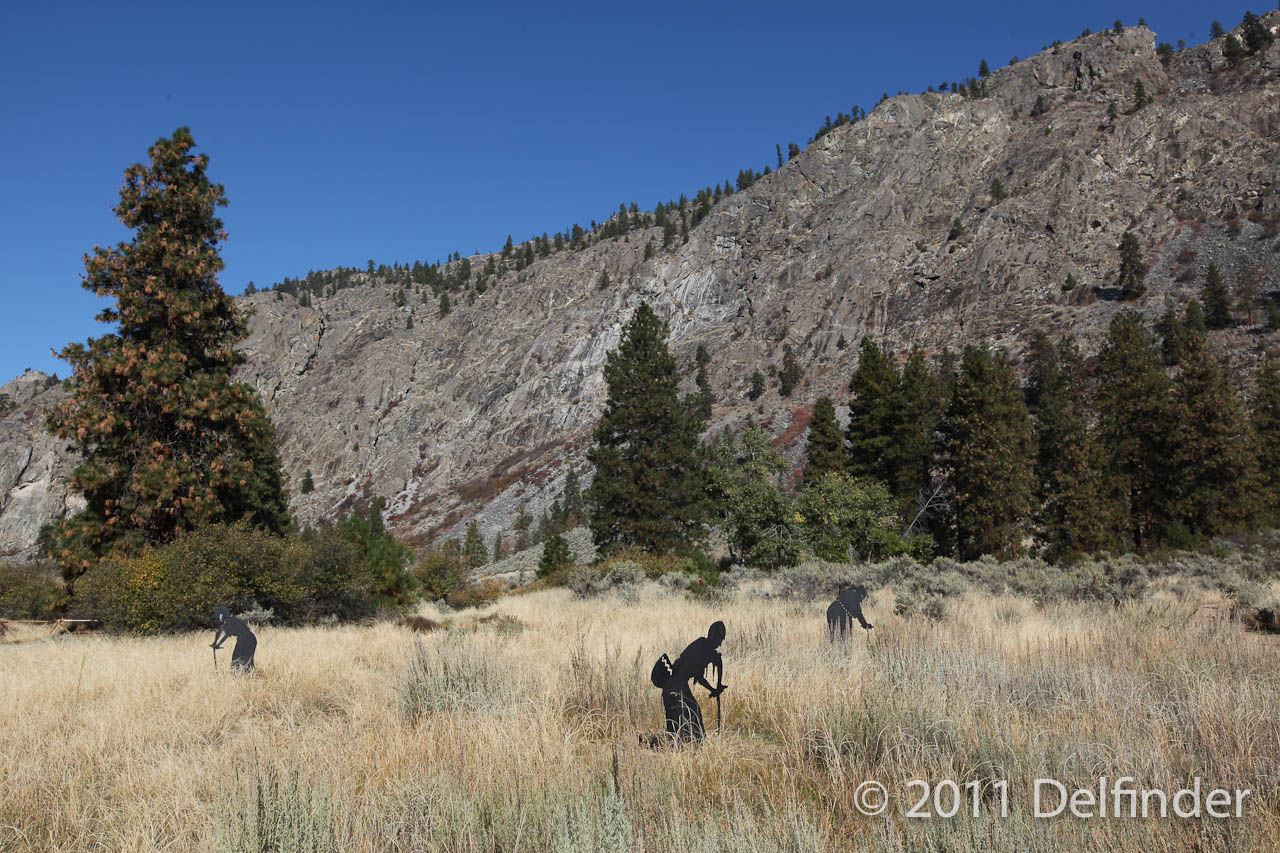 The museum shows the history of schools on reservations. The first school was built by Chief George Baptiste in 1915. The Chief was ahead of his time in that he wanted his children taught within their own background, not sent away to far away schools.  He believed that European education to First Nations children would provide them with the skills necessary for a successful future. From 1932 to 1943 Anthony Walsh taught at the school. He understood and respected the culture of Native People ans implicated their values in his classes. Drawings from this period are exibited in the museum. They reflect the European influence as well as the Native American roots. It’s such a pity that his efforts for a harmonious coexistence weren’t continued by a new teacher who took over in 1943. 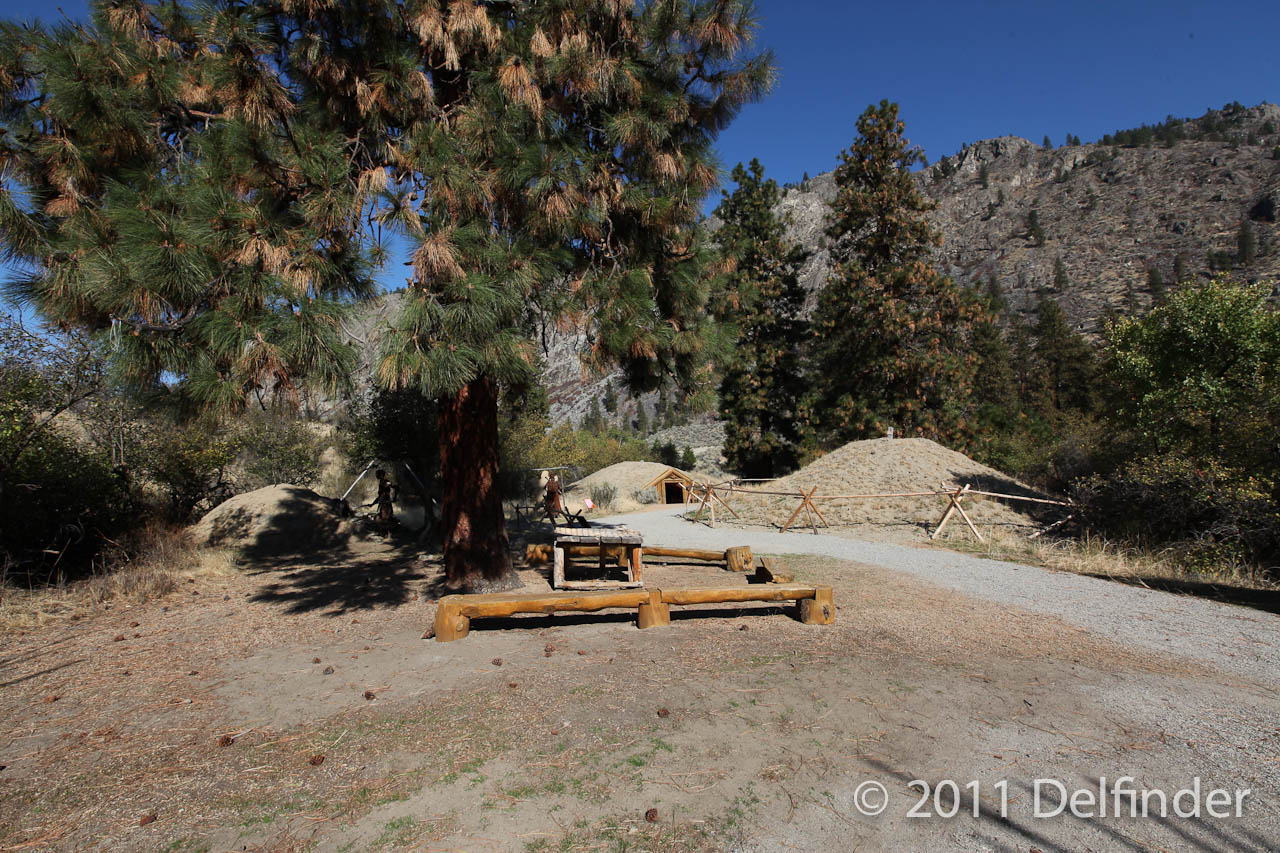 The Osoyoos Indians seem to have preserved despite the odds a good self-awareness. Today, the Osoyoos Indian Band is one of the most economically successful Indian groups in Canada. The Band operate nine businesses in Osoyoos and is an important employer for both natives and non-natives.